On our recent trip, we had the opportunity to visit Ijen, a mountainous area very well known for its highly acidic volcanic crater lake. It is so huge (134 sq km in area) that it is also known as the world largest acidic lake. Not just that, Ijen is also famous for its blue fire, a natural phenomenon that occurs only at two places in the world, one in Iceland and the other one is in Indonesia. Located far at the very eastern part of Java, Mount Ijen is a very beautiful place to be. Wonderful landscapes, lush trees, fresh air and most important it is located far away from the hustle bustle of the city life. 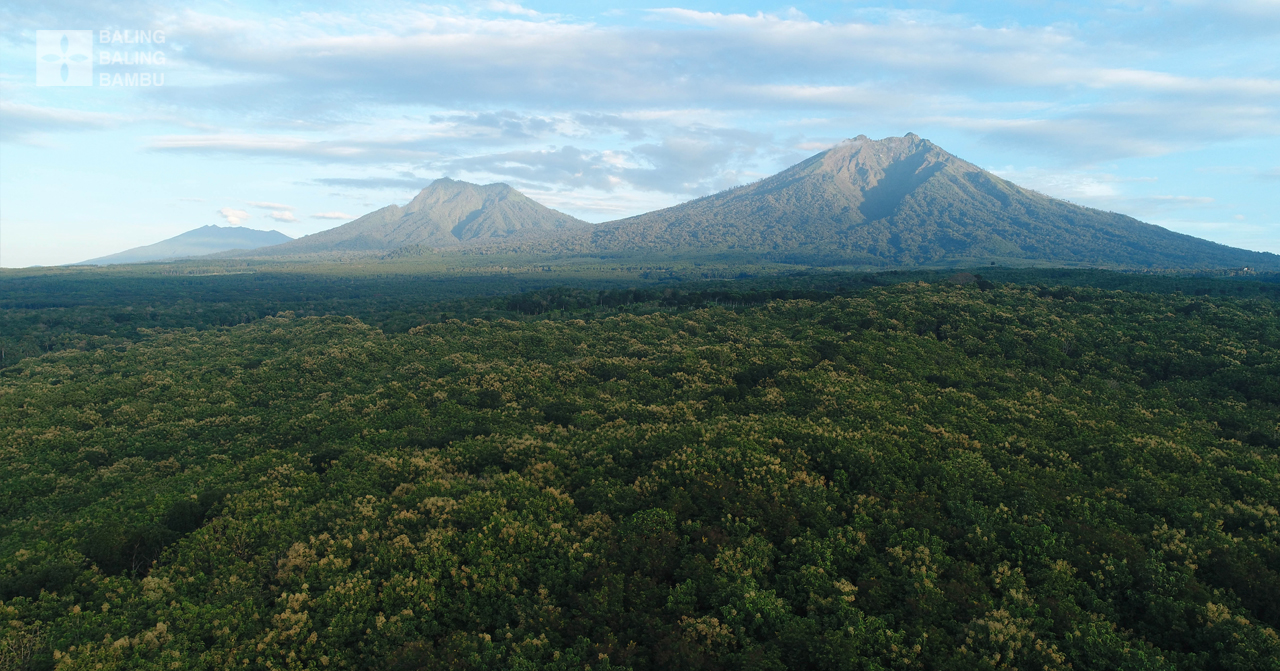 However, wonderful places often have a sad story behind it. As in the case of Ijen, being visually appealing, it is also a site of a laborious intensive Sulphur mining operation. While Sulphur products are everywhere in this country starting from sugar bleaching, shampoos, matches, fertilizers till gunpowders, the mining process is a painful hard work.

While most of you are still sleeping in 2am, nicely tuck inside your blankets, here, around 150-200 miners already start trekking up the mountain, in darkness, along a 3km hike to the top where they will began descending to the bottom of the crater to collect and carry huge loads of pure Sulphur. At the crater, they are exposed to clouds of noxious Sulphur dioxide gas, in which can hurt their eyes, nose and lungs. Coughing and vomiting is their daily dose of vitamins. Most of the miners rely only on a wet damp cloth as a precaution of the gas, while only some can afford or have a facemask to protect themselves. Just recently, several miners were hospitalized due to the volcano emits highly toxic gases. 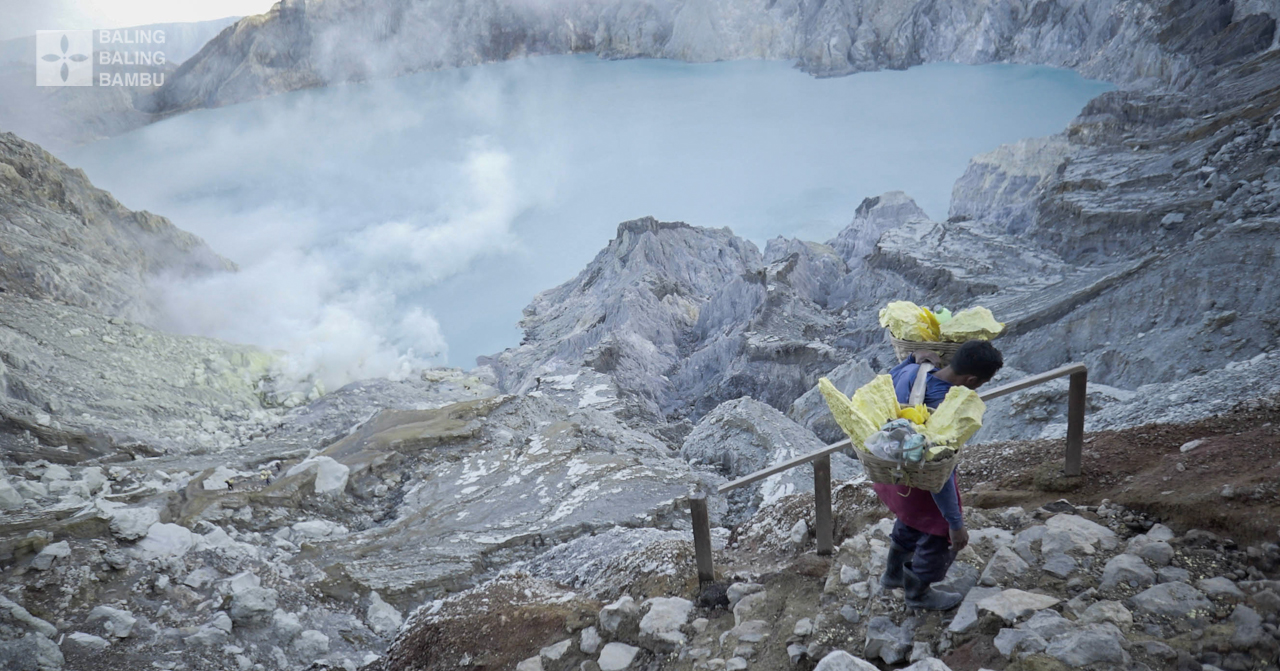 Each physically healthy miner can carry up to 90 kilograms of pure solid Sulphur balanced across their shoulders in a traditional wooden bamboo basket. From the bottom of the crater they have to ascend to the top of the mountain, which is about a 300-meter hike, with huge weight in their shoulders. With every step they take, they have to endure the pain, and all of this hard work, they only get less than USD 15 a day. 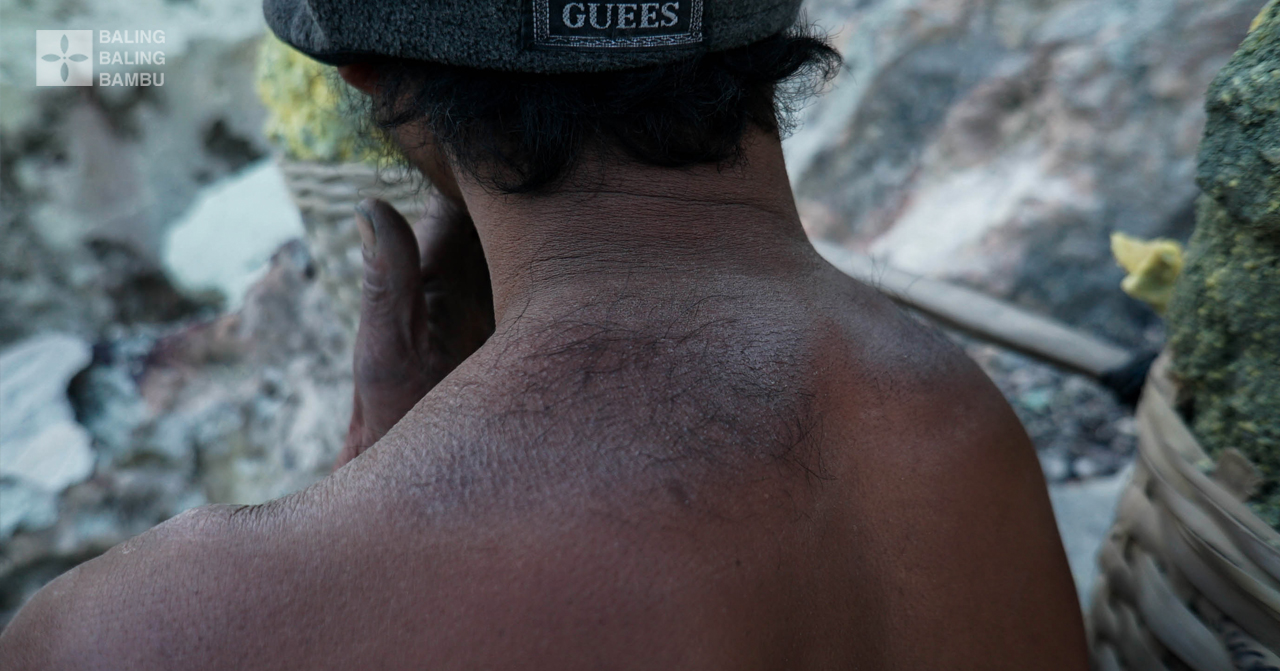 Ijen miners are considered one of earth’s most dangerous jobs. But the miners do this every day, and they can go back and forth to the crater 2-3 times to receive little payments that are not worth the hard work, only because they need to provide a future for their loved ones. Thus, this comes with some consequences to the miners itself. Many miners complain about their coughing problems, ill-teeth’s and suffering from joint injuries in their knees. While many more leaves permanent thick scars on their necks and shoulders due to the heavy loads of Sulphur that they carry out of the crater.

However, the small pay that the miners receive is still considered one of the best earnings in the area, that’s the reason why the miners keep coming back to the volcano. Lack of education also plays an important role in this cyclical phase of poverty. 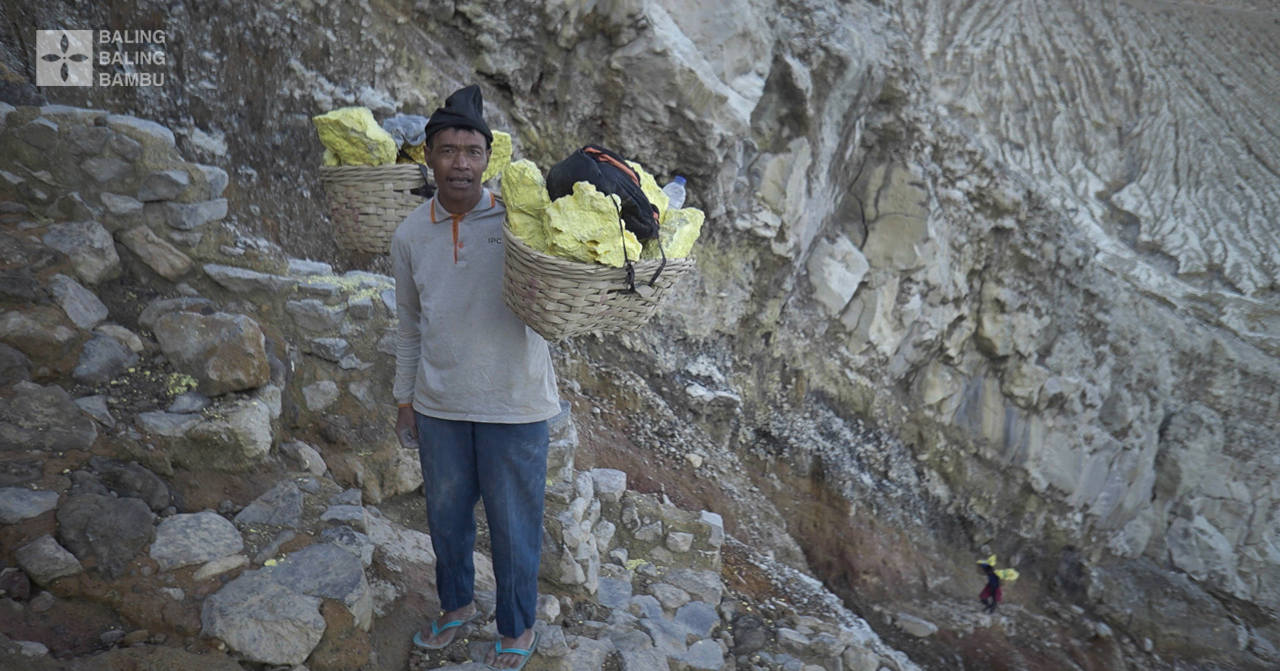 But there are a few of Ijen miners that have turned their lives around. One of them is Ahmad Effendi and his family. Ahmad Effendi or usually called as Ali by fellow miners and tourists has mined since he was still a teenager. He didn’t graduate primary school because his parents didn’t have enough money to pay for the tuition, which is a common problem in the village. So, mining is his only available job in the area since it doesn’t require a qualification nor a diploma. It only needs a healthy body and strength. This is also a case with Ali’s dad, and also with his two brothers, Sugiono and Adi.

Like many other miners, Ali feared that his son will endure the same job as him. So, Ali works hard every morning to collect and carry huge chunks of Sulphur to receive very little payments that he used to supply and provide his family needs. Of course, USD 15 a day is barely enough to make a saving for his children to go to a better school nor to a next level of educations such as university perhaps?

But a life changing event happens when Ali met a tourist in Ijen.

“How long do you want to live like this?”

the tourist said to Ali. “Why don’t you build a homestay for the tourist and stop mining and do a better life afterwards?” said the tourist again. From there on, Ali start to think about it over and over again until one day he finally spoke the idea to his family. His family agrees but another problem poops out, they don’t have enough money to start building a homestay, and if they do build one, who would stay there? Their village, although is located near mount Ijen, it is also a remote area due to the bad roads and infrastructure. But Ali convinced his family that once they build it, guests will start to appear by themselves.

So, they start to save money. Each family members work twice as hard to gather Sulphur’s. 50% of their income that they got that day, they save to buy the logistics and supplies needed to build the homestay. At the end of the year each family members collected USD 1000 to buy the things that were needed. But those weren’t enough. Ali’s dad had to sell all their three cows, which was Ali’s dad and mothers only asset for their old age. It took more than a year to finished the 10-room homestay. But only 3 were fully functioning back then because the rest didn’t have a mattress yet. 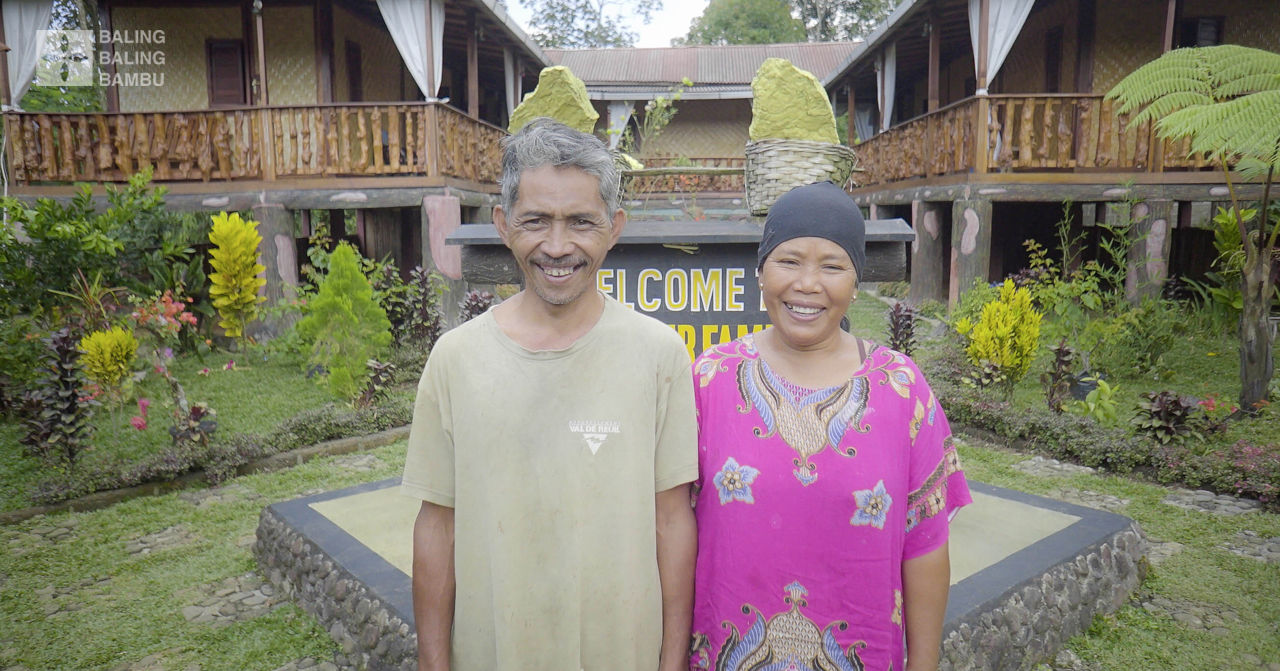 Ali’s family member was afraid the first time a guest stayed at their homestay. They did not believe that someone would really come to their place to sleep. And for Ali’s mother and father, they can’t speak English at all so everything was so frightening for them when they saw a foreign tourist walks up to their house. But now they began to get used to it. They hid their deficiency by showing their guest the best hospitality that they can give. They treat guest as if they are their family members.

At first, their neighbors and fellow miners were ridiculing them and telling them to stop because it’s impossible. But Ali and his family never looked back since that day they start to convince themselves that this can work. Their hope to cut the chain of poverty in their family relies solely on that homestay they’ve been dreaming on. And look at them today, their homestay receives lots of guest during holiday season. Sometimes Ali needs to relocate his guest to his house because they don’t have enough rooms. 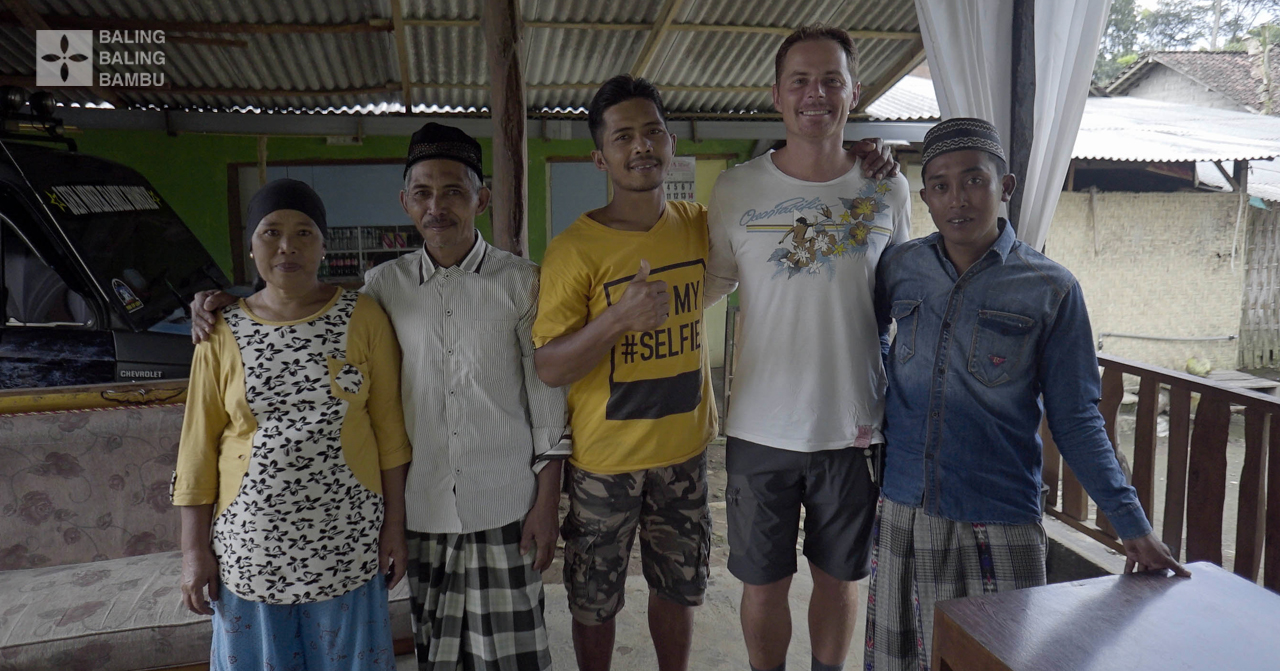 We met a fellow tourist from Italy during our stay at Ali’s homestay. We told him about Ali and his family struggles. The next day he got down from mount Ijen and he told us that every porter up there knows Ali and looked up to him highly because of his efforts. They see him as a successful man now and dreamed that they can be like him one day. When all the porters were asked about Ali, they immediately remembered “Ijen Miner Family Homestay”, which is Ali and his family homestay name. A homestay that has such warm and friendly vibes. The best hospitality that you can ask for.